“We are thrilled that this event is the first integration of high school and collegiate esports nationally,” said Todd Harris, founder and CEO of Skillshot Media. “We are appreciative of the participation from NACE universities, NASEF high schools, multiple game publishers, and many partners. Beyond showcasing competition across six game titles and three hardware platforms we are emphasizing student education and skill development throughout the event, truly combining playing with learning.”

All competitions and programming will be broadcast in partnership with Twitch Student on twitch.tv/skillshot per the schedule below:

HyperX is supporting the event by awarding a Cloud series gaming headset to every winning player and team.

“We began the spring season with 227 registered university teams, and it all comes down to this weekend,” said Michael Brooks, executive director of NACE. “The finals will be fiercely contested and we are excited that college coaches can also get a view into up and coming high school talent via this combined event.”

During breaks in the competition, event sponsor eHire and other partners will provide video tips to viewers around securing a job inside and outside of the massive gaming industry.

“The NASEF approach uses esports to build life and career skills,” said Gerald Solomon, founder and executive director of NASEF.  “Events like the Scholastic Esports Championship allow the thousands of high schoolers participating in NASEF clubs to gain insight into college scholarships, and pathways to higher education and employment.” 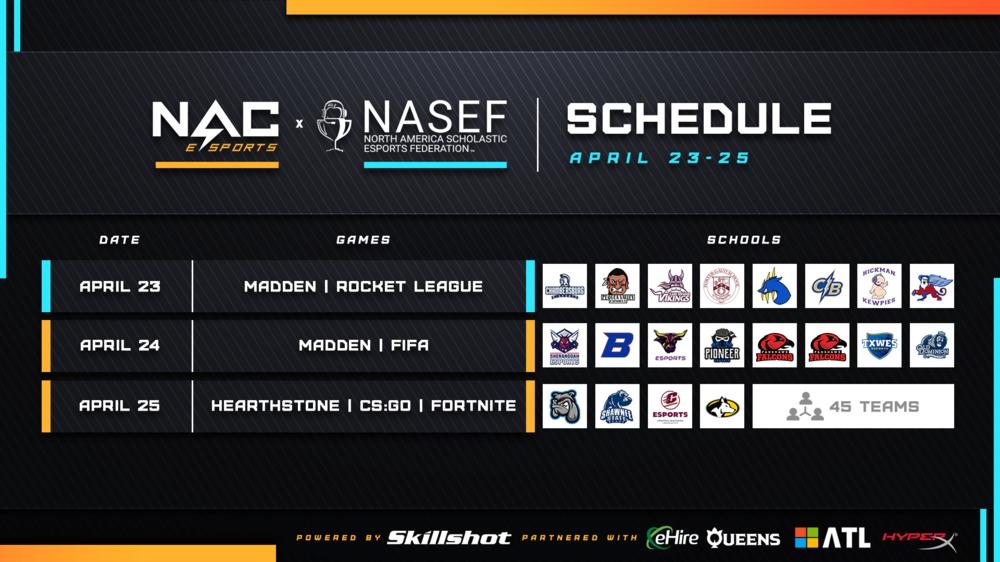 Added Christie St. Martin from Queens Collective, “At Queens, our goal is to democratize access to gaming and economic opportunity for women worldwide.  We are proud to support the Scholastic Esports Championship and their message of inclusive competition and game-based education for upward mobility.”