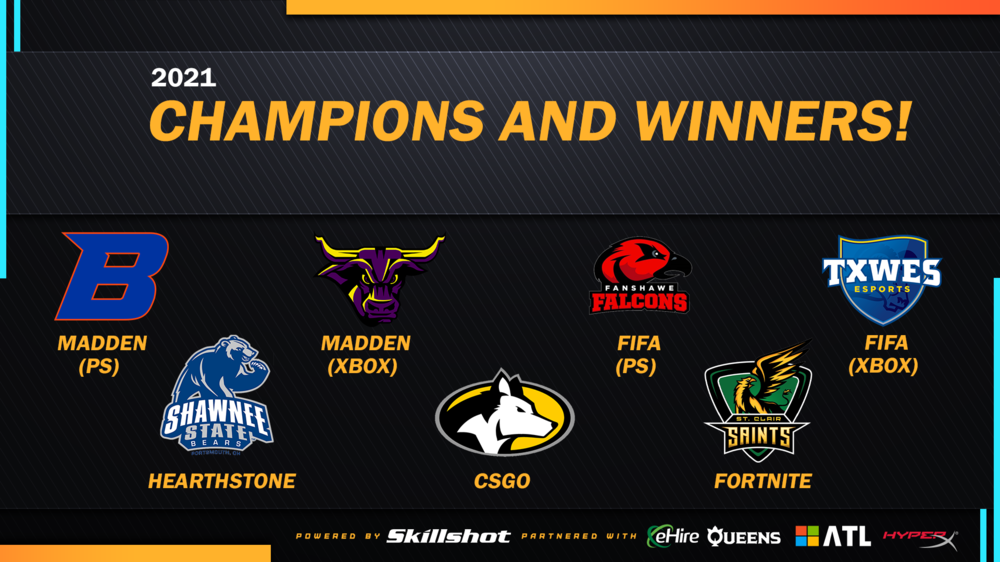 The National Association of Collegiate Esports (NACE) and the North America Scholastic Esports Federation (NASEF) concluded their spring seasons this past weekend via a three-day event hosted and broadcasted by Skillshot Media in partnership with Twitch Student. Additional support was provided by partners Microsoft, HyperX, eHire, and Queens Gaming Collective.

Competition was hosted across six different game titles for the event: Madden, FIFA, Rocket League, Hearthstone, CSGO, and Fortnite. With the help of host Lauren “GlitterXplosion” Laracuente, accompanied by casters Trevor “ConfusedCaribou” McNeal, Troy “Pibbbcasts” Welling, Devin “PiraTechnics” Younge, and Tadhg “CelticTigerLoL” Brennan, the NACE and NASEF competition was broadcast via Twitch with a combined total of over 474,000 views.

“Our first-ever Scholastic Esports Championship had over 470,000 live-views across three days of broadcast in partnership with Twitch," said Todd Harris, CEO of Skillshot Media, "We were honored to shine a spotlight on top student competitors and the organizations NASEF and NACE as they advance scholastic esports and prioritize student wellbeing and outcomes"

The 2021 NACE National Championships were held on April 24 and April 25. The spring season started with 277 teams, competing across five different game titles. NACE competition was hosted entirely online this academic year due to the unique challenges the COVID-19 pandemic presented. The  NACE National Champions and Spring Cup Winners are listed below:

The three teams listed below also received cash prizes for their respective rankings in the final Fortnite Spring Cup match:

“The 2020-2021 academic year presented a unique challenge for NACE, resulting in a completely online finals competition, the second of which hosted this year,” said Michael Brooks, Executive Director of NACE, “Despite these challenges, the number of esports fielded within NACE more than doubled from the previous year. The impressive results from these finals speaks to the herculean efforts of our members, students and partners. NACE is set up for even more growth in the professionalization of the collegiate esports space.”

“The Scholastic Esports Championship allows the thousands of students participating in NASEF clubs to gain insight into college scholarships, and pathways to higher education and employment,” said Gerald Solomon, founder and executive director of NASEF.

Thanks all of the 2021 spring season participants for their hard work and dedication. All of the VODs from the National Championships and Fortnite Spring Cup are available at skillshot.tv.